Do you know about the OTHER presidential primaries, debates, polls?

The battle among candidates of one of the parties for their presidential nomination is dominating the headlines -- and California is one of those "Super Tuesday" states.

But if you are among the growing number of voters who are registered Libertarian, you received a ballot listing an entirely different set of choices. Do you know what these candidates stand for?  Read below for details about:

As part of this year's primary, the state of California is offering voters of all parties choices for president. If you are registered Libertarian, you should have already received a ballot with the Libertarians running for president. If you are not registered with any recognized party (i.e., independent), you can also request this ballot. For more info see the explanation from the Secretary of State.

(Want to know more about these candidates? Read on for info about debates and polls.)

Remember to vote by this coming Tuesday!

Other Libertarians on the Ballot

Regardless of how you are registered, in most parts of Santa Clara County you will find one or more Libertarians on the ballot, running for offices like Congress and the state legislature. Vote for these candidates to say NO to big government, NO to taxes, and NO to government meddling in our personal choices!

And speaking of taxes...

You'll also find on your ballot one or more proposals that will increase taxes. Just say no to new taxes! For detailed recommendations by district, see the list at: https://www.scclp.org/2020_primary

There's nothing like a debate to help you figure out who the candidates are -- and if you were at the Libertarian Party of California's annual convention two weeks ago you had a chance to watch six of the candidates for our presidential nomination debate in person. But even if you weren't there, you can still watch this debate online.

The six candidates who participated in that debate are considered among the leading contenders for the LP's nomination, with that nominee expected to be on the ballot all across the country in November. Note, however, that not every candidate in this debate is listed on the primary ballot, because some of them announced since the deadline for that ballot, last fall. (But of course you can still use your ballot to indicate your preference among those who did announce before the deadline, even if your first choice isn't listed - see below for how the actual decision is going to be made.)

So Who Is Ahead in this Race for the Nomination?

That's hard to say. Straw polls continue to be held in various states. As you can see from this chart, there are several candidates who have a good deal of support, but the situation is still fluid. 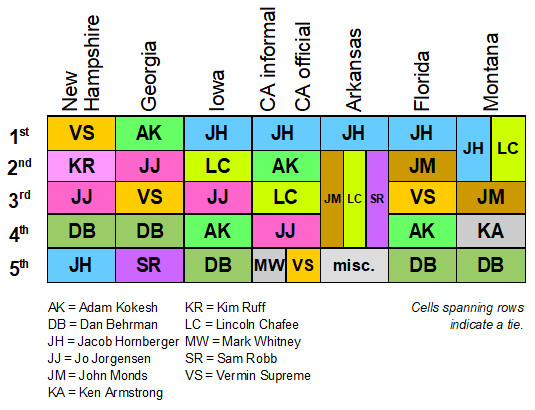 Note: This chart just shows relative rankings -- who came in first, second, etc. More details about these polls, and lots more information about all of the candidates, can be found at:

How Will the Libertarian Nominee Be Chosen?

The Libertarian Party's candidates for President and Vice President will be chosen at the LP national convention, being held in Austin over Memorial Day Weekend. Unlike the conventions of some other parties, the delegates to this convention are not bound by any primary, caucus, or other votes taken before the convention. So they are free to choose the candidate who they believe will best represent our ideas, based on all the information available up to that point.

There will be delegates at this convention representing every state, chosen by the LP affiliate organization in that state. Under the national LP's rules, each state gets a certain number of delegate slots. California is allocated 107 delegate slots this year, and the delegates were chosen at the state convention two weeks ago. (There are also alternates, who fill in if not all the delegates are able to be there.)

Ten of those 107 delegates are from right here in Santa Clara County, and they will be directly involved in choosing who will represent the Libertarian Party nationwide in November.

So if you have a preference, those are the people to talk to! Many of them will likely be attending our county central committee meeting coming up Saturday, March 7th.

A Different Kind of Presidential Debate

Here's something you may not see anywhere else until after the presidential nominating conventions -- a debate among candidates of more than one party!

Free and Equal, an organization dedicated to allowing all candidates to be heard in debates, will be holding a debate this coming Wednesday (4 March). Based on the information currently available, eight Libertarian candidates will be participating in this debate!

You will be able to watch this debate online at:

If you need more information about any of the topics above, don't hesitate to ask. Meanwhile, watch the debates, visit the candidates' web sites, ... and remember to cast your primary ballot by this coming Tuesday!