San Jose, CA -   Santa Clara County supervisors are considering the closure of Reid-Hillview Airport.  The county representatives intend to weigh the potential use of the land to build affordable housing - housing that will take years to build and will have minimal impact.  The Reid-Hillview Airport site is designed for general air traffic that cannot be absorbed by Mineta or other farther airports. It is a historical site, an emergency response center, an employment source, and a community builder. The Libertarian Party of Santa Clara County urges our representatives to place value in the safety of San Jose and its neighbors. We acknowledge the need for housing, but also that this need has to be balanced with safety,  jobs, and community.

Mineta Airport is Not a Home for Small Non-jet Aircraft

Mineta San Jose International Airport is consistently under pressure to grow its commercial flight traffic.  Market demands for longer-distance flights require larger jet planes. Currently, 90% of private airplane traffic at Mineta Airport is by small jet.  Non-jet aircraft traffic is not designed to mix with these types of larger crafts. Conflicts between light planes and airliners were frequent before most light traffic was moved to Reid-Hillview Airport.  We would not want such conflicts to resume. If Reid-Hillview were closed, the light planes would have few options for getting to the South Bay. Palo Alto and San Martin are far away from San Jose. They both have only one runway and Palo Alto is too short for some planes.  The reality is, if you close Reid-Hillview Airport, most of the light planes will be merging in with the big jet traffic at San Jose Mineta.

Reid-Hillview was a strategic and crucial part of Northern California’s recovery after the Loma Prieta earthquake. Small, agile airplanes were required to deliver critical supplies to those seriously impacted in Watsonville after mountain and coastal roads were blocked, cutting off Santa Cruz and Watsonville from relief efforts by ground.  The airport serves as a base of operations for Civil Air Patrol and Cal Fire. Reid-Hillview offers the emergency staging required by our community; as we know, the next major earthquake is imminent.

Reid-Hillview Airport generates approximately $10 million dollars a year in business revenue, and $1 million dollars in state and local taxes, through approximately 100 jobs. Reid-Hillview Airport is the home of San Jose State University’s Department of Aviation and Technology, as well as multiple flight schools.  At least 60% of its flights are those of student pilots. The flight schools located at Reid-Hillview provide job training to an industry in high demand for employment, as well as primary employment for retired commercial pilots, who make up a majority of the 30+ flight instructors at this site. Keeping Reid-Hillview Airport open helps maintain San Jose’s employment-land ratio, as there are dozens of blue-collar jobs associated with the nine fixed-base operators who provide mechanical maintenance and operations of the site that would also be lost should the airport close.

Community Building
Those who encourage the closure of Reid-Hillview Airport misrepresent the role this historical site serves in our community.  Our civic leaders would be remiss to ignore the critical resource the site provides for charity flights, San Jose festivals, car shows like Hot August Nights, and their annual Airport Day, which raises money for the Valley Medical Center Foundation.  In addition, the airport hosts a variety of community-based activities and charitable programs such as Young Eagles, Angel Flights, and Pilots N Paws.

Don’t Fix What Isn’t Broken!
Underfunding concerns are misrepresented:  on December 4, 2018, the Santa Clara County Board of Supervisors voted 3-2 not to accept new Federal Aviation Administration (FAA) grant funding for the airport.  Concerns over safety are poorly estimated: a county-funded study found that the airport was the safest possible use of the land for the well-being of airport neighbors. No one living around the airport has ever been injured by an aircraft accident.  Regarding pollution, we already see that technology is evolving.  Experts anticipate that the current leaded fuel (100 Low-lead) will be phased out over the next 10 to 20 years as alternative fuels become available.  Also, some clean, quiet electric planes are progressing beyond the experimental stage.

Affordable housing inventory is a concern shared by our community, but the Reid-Hillview location will not offer a timely solution. Shuttering operations will take 12 years initially.  After that could be years of environmental impact studies before building could even commence, by which time many other housing solutions - that do not reduce our communities’ safety or employment - could be implemented. 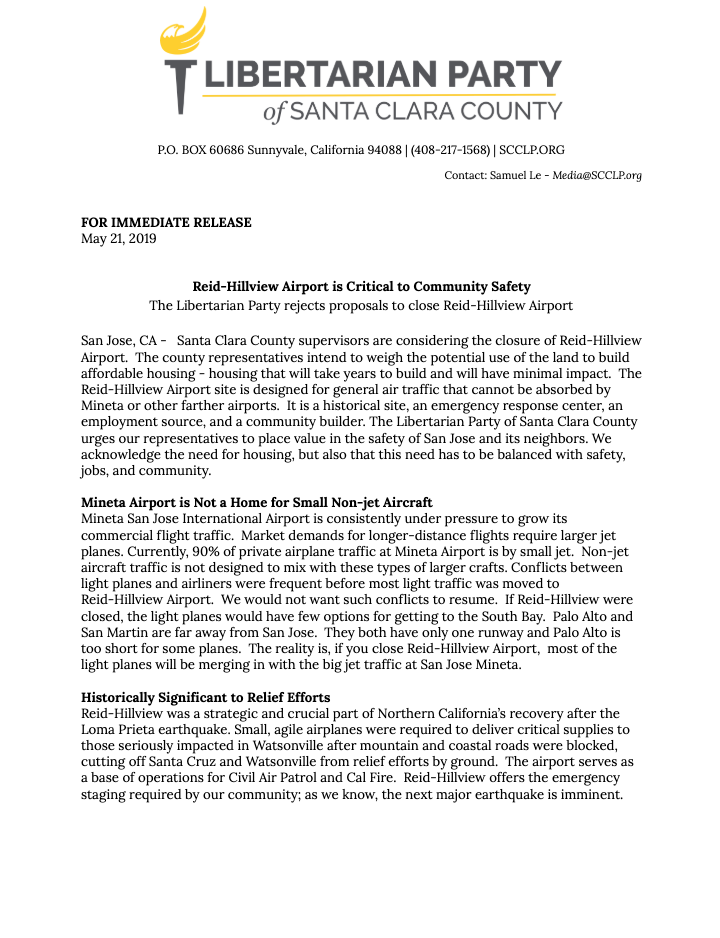