San Jose, CA — San Jose Mayor Liccardo and Vice Mayor Jones issued a memorandum on Tuesday, February 19th, 2019 to direct the City Manager and City Attorney to revise and update sections of Chapter 10.32 of the San Jose Municipal Code regarding “Firearms Sales”; in response to the proposed congressional gun laws that are likely to fail. The memo outlines new regulations for all licensees of vendor permit holders, prohibition of the sale of any firearms and ammunition within or from a residence, and requirements for regulation of “downloadable firearms”.

The Libertarian Party of Santa Clara County supports gun safety. Ensuring that the public is educated and that the proper rules are enforced is critical to ensuring the wellbeing of individuals and the greater community. This is why we urge the city work with County and State authorities to properly enforce existing gun seizure and “Straw” purchase laws, which are currently not being prioritized. “Issuing these new laws will only exacerbate law enforcement funding and criminalize law abiding citizens, not stop crimes.” explains the County Chair, Jennifer Imhoff. “More importantly the laws proposed by Mayor Liccardo will drive responsible sellers out of business and encourage more residential and black market sales”

The memo calls for regulations around “downloadable firearms”. Restricting access to design files conflicts with existing court rulings against creating such laws. Restricting access to design files conflicts with our right to free speech. There is no way to enforce this type of law before a crime happens. Our concern should be getting help for those suffering mentally from depression or illness; not adding an additional charge to a more harmful crime that already happened.

Requirements towards audio and video surveillance are grossly under researched. We understand the intent, however, little is understood to what extent this regulation would apply. How long do records need to be kept? Where would the data be stored? Who could gain access to the recordings? And more to the point, how would these records violate the California Consumer Privacy Act of 2018?

Gun sellers are already doing the right thing by providing training, inventory checks, reporting missing equipment, and supporting efforts to curb suicide and domestic violence. Asking for further measures towards these efforts will only put a financial burden on gun shop owners and potentially criminalize and close down safe locations for transactions. The Mayor’s memo pulls on heart string with the reminder of past shootings but fails to show that San Jose gun shops are not doing enough. The memo issued discusses national data but likewise fails to show that San Jose is not already doing enough.

The Libertarian Party of Santa Clara County understands the concerns the community has regarding residential sales. Residential transactions are in response to the county’s systematic efforts to close down the existing safe locations for firearm related transactions and education.Before being banned last year, Gun Shows on the County fair grounds had provided the opportunity for these types of private sales to occur where ID was required for entry, armed guards were present, suicide assistance literature was abundant, and safety equipment was sold; providing the very things the Mayor’s proposed laws intend. The closing of safe locations, like the County gun shows and now the 10th street range, only drive gun sales to neighborhoods and the black market.

Gun safety is an important priority to the San Jose community and something the Libertarian Party passionately supports. This is why we reject the proposed new laws. 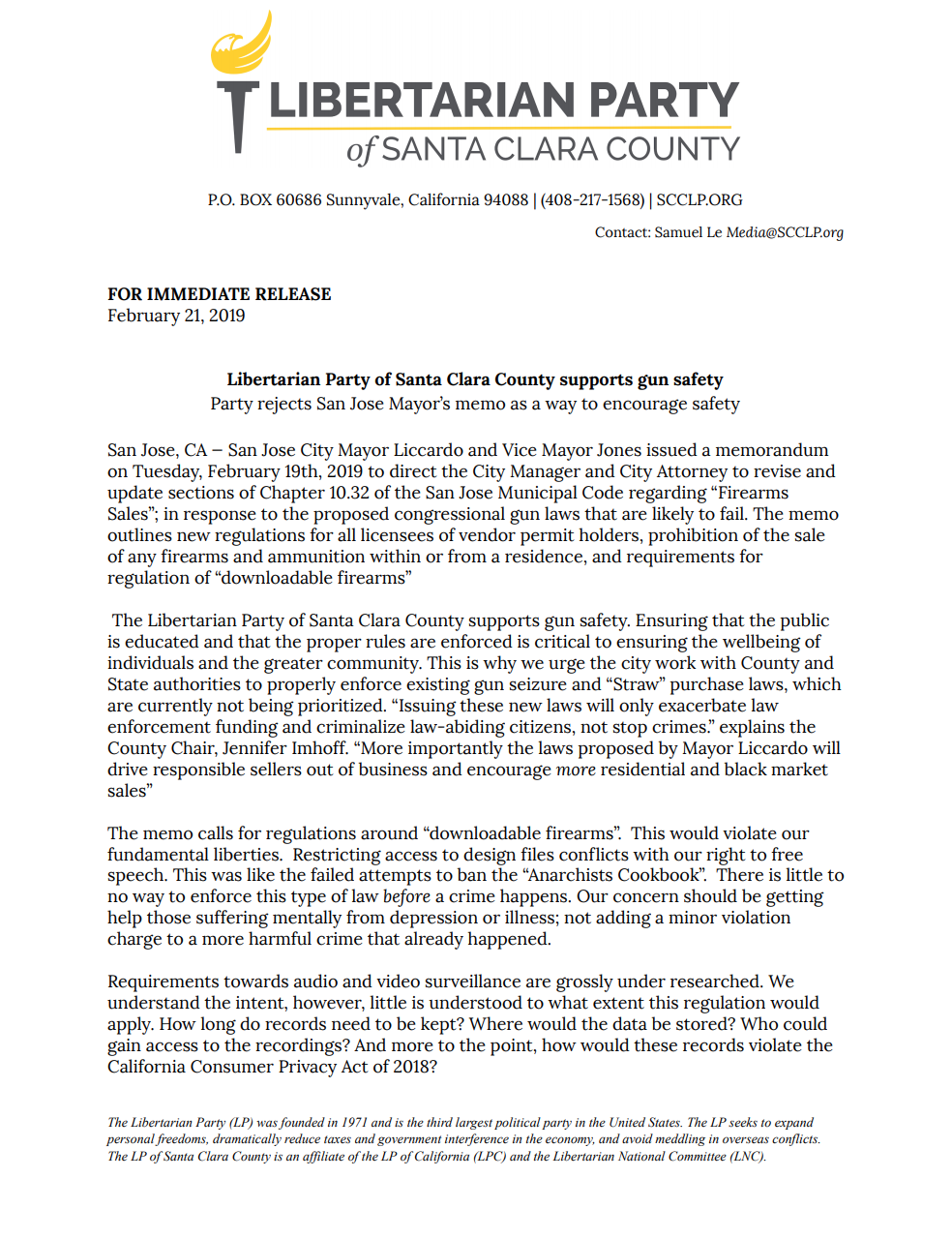