Members of the Libertarian Party held at least 26 Tax Day protests across the country throughout the weekend leading up to April 15. Each protest was inspired by the Libertarian idea that all people have the right to keep their own wealth and possessions. “All persons are entitled to keep the fruits of their labor,” the Libertarian Party platform states. “We call for the repeal of the income tax and the abolishment of the Internal Revenue Service and all federal programs and services not required under the U.S. Constitution.” 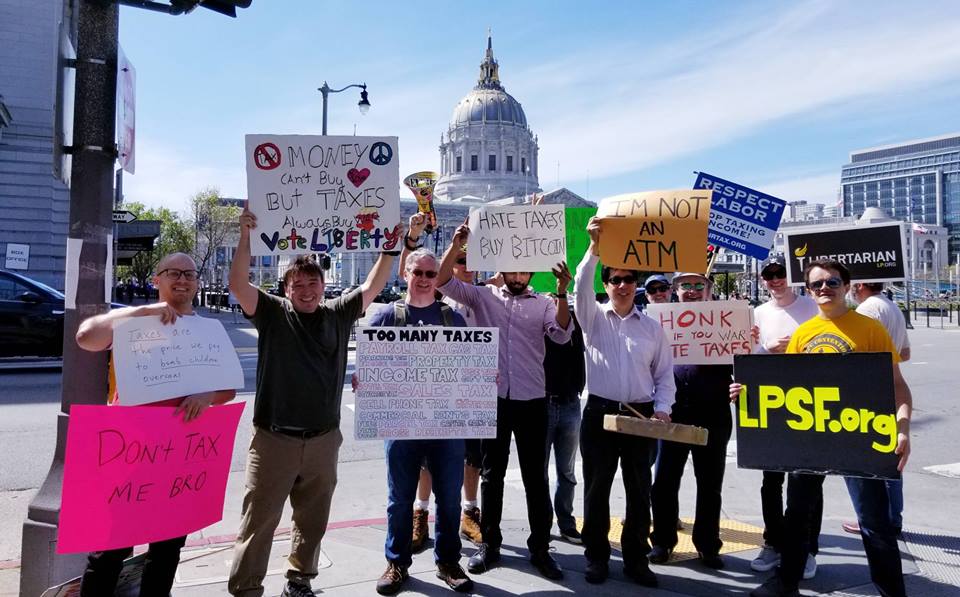 This doesn’t mean we oppose funding for roads or firefighters, but that we believe the true value of social investments can only be obtained through voluntary transactions. Omnibus tax structures, like that of the IRS, institute a culture of government spending without accountability or transparency. Most taxpayers accept the cost of repaving roads in their community but reject the $6 trillion spent on war efforts since 9/11.  Most taxpayers want to help the homeless, but In 2016, San Francisco allocated a record $241 million on homeless services, but it still can’t track results. And just last November, Santa Clara County approved over 3 billion dollars of increased taxes in bonds alone.

On Saturday, April 13th, the Libertarian Party of San Francisco held their Tax Protest. Many turned out to help support the county parties' efforts.  A dozen supporters met at Civic Center, where they raised signs to be seen by many of the residents and tourists. Members from San Mateo County and Santa Clara County joined in to show regional support. The event was filmed by a local documentary team that is working on a film covering international efforts to further libertarian values.  The documentary team is specifically following the efforts of one of Santa Clara County’s former activists, Roger Ver. Roger Ver, the CEO of Bitcoin.com and a well-known Bitcoin Cash proponent, has served as the membership chair of Santa Clara County and was a candidate for State Assembly in 2000.  Former LPSCC chair Marv Rudin remembers Roger as “both venturesome and energetic, and had a great attitude.”   The LPSCC will continue to keep in touch with the documentary efforts, and to keep our members informed of its progress.