The Libertarian Party of California met for our annual convention at the end of last month.  The two-day convention was held in Long Beach over the weekend and hosted a list of high profile names and a series of liberty-minded events.  As noted before, this included the endorsement of candidates, election of officers, and the adjustment of bylaws; all decisions that will chart the LPCs future course.

Mimi Robson was elected as our new chair and with her resignation as secretary,  Angela McArdle, from the LA County, was elected in her place. Both Mark Hinkle and Jennifer Imhoff, from Santa Clara County, were re-elected to at-large. New to the team are Rebecca Lau, of San Francisco County, Kevin Shaw, of LA County, and Justin Quigley, of Stanislaus County.  Alternate at-large positions were filled by Gail Lightfoot and Mark Herd. Continuing their terms are vice chairs Brent Olsen and Jonathan Jaech; and at-large members Alex Appleby, Wendy Hewitt, Robert Imhoff, Tyler Kuskie, and Boomer Shannon. The judicial committee will consist of Joe Dehn, Matthew Pautz, Jill Pyeatt, Bob Weber and Susan Marie Weber.

Delegates for the National Libertarian Convention were deliberated and voted on. Of the 108 delegate available for California we were able to fill 96 of them.  Everyone nominated was appointed with the exception of James Weeks, who was known for his g-string dance on stage at the 2016 convention. There was a lot of discussion about the values of free speech and the need to be an inclusive party as they balance with our need to recognized as a professional political party with an intelligent message.  James was not in attendance and while he is a member of the Libertarian Party of California his membership to National had been revoked after the 2016 incident. The full list of selected national delegates should be posted by the state soon.

Saturday evening of the convention included the gubernatorial debate between the two Libertarian Governor candidates, Zoltan Istvan and Nickolas Wildstar.  This debate was filmed and is available on the LPC YouTube channel. Early on Sunday, Tim Ferreira moved a motion to endorse both candidates for California Governor, Nickolas Wildstar, and Zoltan Istvan. The motion to endorse both candidates passed with a majority but was contested by delegates who opposed the double endorsement. Multiple attempts were made to undo the motion and eventually a motion was approved to separate the joint endorsement and revote on each of the candidates separately. Nicholas Wildstar was given ten minutes to speak to the delegates. The motion to endorse Wildstar passed with no objections. Zoltan Istvan was no longer present at the convention to speak for himself and was endorsed by a 45-35 vote.

During the approval of the convention agenda, a motion was made from the floor, and approved, to switch the Bylaws Report from Sunday to Saturday with the Platform Report.  This was to help address the higher than average bylaw changes presented and the incompletion of the Platform Report, at the time of the motion. While not all changes presented by the Bylaw Committee were addressed in the allotted time, a majority was addressed.  A couple of those approved were minor adjustments to allow for modernization of the verbiage used, such as saying “electronic communications” instead of “phone, fax, or email”. A minor but impactful change made was to change the reference of which edition of Robert’s Rules of Order from a specific edition to “the latest version”.  This change will allow us to avoid accidentally not updating the edition when released but more significantly the adjustment to the 11th edition will allow for more opportunity to include teleconferencing; which is a growing need with California being a large state geographically and as more counties become active and involved.

The biggest, and most anticipated, bylaw change for adjusting the regional distribution of LPC membership was approved to incorporate a 3rd central region.  This changed affects not only the geographical distribution but also made some key adjustments to our Executive leadership. The addition of a central region means the addition of a leadership role, traditionally overseen by a vice-chair.  This role will now be labeled as an Area Coordinator and will be elected in odd number years. The bylaw change also included the addition of a more traditional vice-chair role whos focus will be on assisting the Chair rather than area coordination. The size of the Executive committee, traditionally a 15 person team, will not change with the additional two seats by removing two at-large positions. At-large representation will go from 10 seats to 8 with four being elected for two-terms at each convention. There will be no adjustment to the alternative roles.   Santa Clara County will remain in the Northern Area where we can continue to coordinate with the nine-counties that comprise the Bay Area. 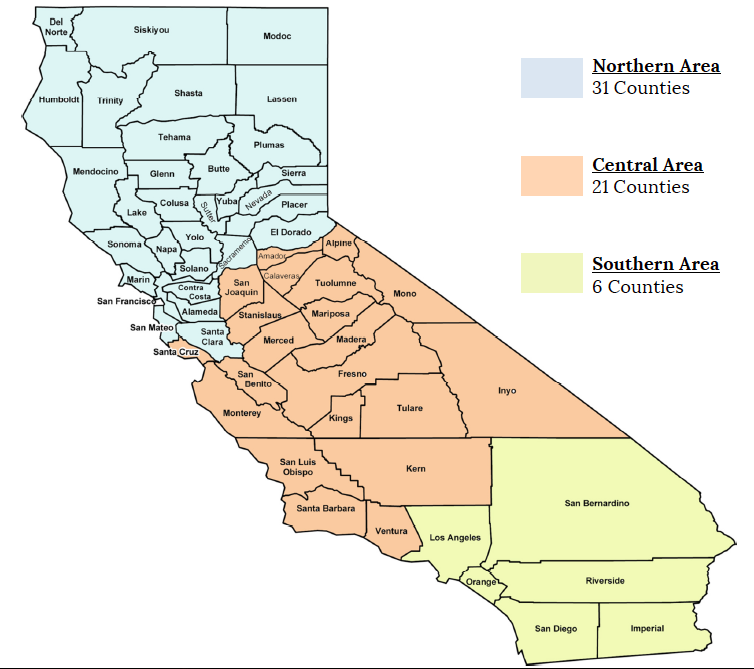